At Radley we can boast some of the finest school golfing facilities in the UK. The centrepiece of this is a beautifully manicured nine hole golf course which provides a good test for all levels of players.

The course is a par 34 with three par 3s and an opening par 5. We have two designated practice areas, a putting/chipping green and two warm-up driving nets.

Success in the West of England Schools’ has been frequent with a now record number of consecutive wins from 2012 to 2018. The boys also have a large number of “friendly” matches against local schools which are played on venues like Sunningdale, The Berkshire, Frilford Heath, Stoke Park and Huntercombe. The team comprises six players and is selected from across all the year groups. Nevertheless, it is desirable that boys are in possession of a single figure handicap to make the senior team.

The juniors are also active on the golfing scene and play in a variety of “friendly” matches against local schools across all three terms. These are usually played over 9 holes on the course of the host school. The team is selected on a rotational basis and will always try to be matched against our opponents. Fixtures should therefore be constructive and meaningful for all parties. Coaching is a very important feature of the programme and is undertaken by a local PGA professional. The team golfers are fortunate to have a membership arrangement with Frilford Heath Golf Club and can also visit Drayton Park to work on technical aspects under the supervision of the professional. They also have access to a strength, conditioning and nutrition programme developed by the Director of Sport.

During the average Radley week, boys either in the process of gaining, or who have already gained a handicap have the opportunity to play golf as part of the alternative sports programme (ASP), in one of the activity slots. All boys whether they have a handicap or not are able to use the course when they have “free” recreational time. The ASP sessions run every Tuesday, Thursday, Friday and Saturday afternoon and are under the control of the Master-in-Charge. 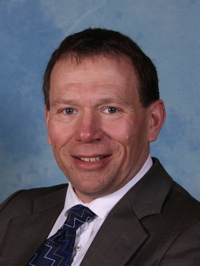 Paul Miron
Maths Teacher, Master in Charge of Golf
I joined Radley in the summer of 2009 after a 20 year career in the financial markets. Looking back on the schools at which I could have ended up starting my teacher career, I feel immensely fortunate to have been lucky enough to get a job teaching Maths in such a highly successful department within such a wonderful environment. I make full use of all the incredible facilities here, and as well as being Master in Charge of Golf, and having the luxury of a first rate 9 hole course on my doorstep, am an avid real tennis player and classical guitarist.
In Sport
where next?