We play competitive fixtures for 18 teams (6 Midgets, 4 Junior Colts, 3 Colts and 5 senior) and this includes participation in the prestigious Independent Schools Hockey League.

All boys have the choice of hockey or rowing in the Lent term of their Shell year and those in the top teams are expected to continue playing in the Remove and beyond.

The hockey facilities at the College include three astroturf pitches, which ensures that all of our teams will benefit from playing on the best possible surfaces. In addition to this, a full sized indoor hockey pitch in the sports centre allows us to play indoor hockey in the Michaelmas term. Our excellent facilities are complimented by a highly qualified and committed coaching staff. The team is led by Michael Hills (Master in Charge of Hockey) who is supported by our full time hockey professional Peter Bennett and 1st XI coach Graham King, who boast a wealth of playing and coaching experience at national and regional level.

Touring is an important feature of hockey at Radley. The 1st XI travel to Barcelona for a 4 day tour every January as part of their pre-season preparations and embark on a major tour every three years. The most recent major tour was a successful trip to Holland, Germany and Belgium in the summer of 2013.

RCHC boasts an excellent coaching set-up under the direction of Michael Hills (Master in Charge), assisted by Peter Bennett. Graham King coaches the 1st XI squad.  Between them they have extensive playing and coaching experience at schools, county, regional and club level in the UK, the English Premier League and South Africa.

The Midgets hockey programme is overseen by Peter Bennett (Midgets 1 coach). Preparation involves two sessions per week in the Michaelmas Term. These take place on Monday afternoons with Richard Hughes as part of the Monday activities programme and on Tues/Thursday afternoons with Peter Bennett (Hockey Professional) from 4.30pm to 6.00pm. During the Lent term the team plays in the ISHL South competition and in the National U14 schools competition. Training takes place on Tuesdays, Thursdays and Fridays with matches on Saturdays. A member of the S&C team works with the team for 20-30 mins prior to hockey training twice a week.

The Junior Colts and Colts programme is overseen by Michael Hills (J Colts 1/Colts 1 coach). In the Michaelmas Term preparation for the hockey season involves a weekly session. These can typically take place on Wednesday evenings (9.00-10.00pm) or on Tuesday/Thursday afternoons (4.30-6.00pm). For pre-season the Colts 1 squad goes to Barcelona for 4 days in January. The teams play in the ISHL South competition and in the National U16 schools competition. Training takes place on Tuesdays, Wednesdays (APT/9.00-10.00pm), Thursdays and Fridays with matches on Saturdays. A member of the S&C team works with the team for 20-30 mins prior to training twice a week.

The senior programme is overseen by Graham King (1st XI coach). The Michaelmas Term preparation involves at least two sessions per week. These take place on Wednesday evenings (5.00-6.00pm) and Thursday afternoons (4.30-6.00pm) and are run by Graham King (1st XI coach), Michael Hills and Peter Bennett. A member of the S&C team joins these sessions to run the pre-season S&C programme. The 1st XI squad goes to Barcelona for 4 days in January. The 1st XI plays in the ISHL South competition. Training takes place on Tuesdays, Thursdays and Fridays with matches on Saturdays. A member of the S&C team works with the team for 20-30 mins prior to hockey training twice a week.

We also have a full size indoor hockey pitch. 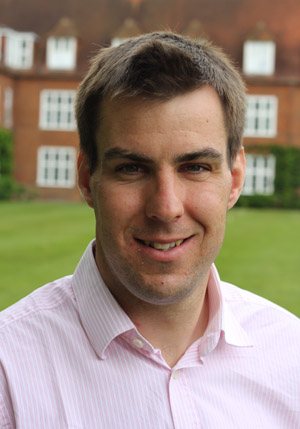 Michael Hills
Maths Teacher, Master I/C of Hockey
Born in Wolverhampton, I completed an undergraduate Masters in Mathematics at Oxford University. I stayed on at Oxford to study for my PGCE. Straight after my teacher training I joined Radley College teaching in the Mathematics department. I was Sub-Tutor in B Social from September 2010 to July 2017. Outside of the classroom, I greatly enjoy my Sport, particularly Hockey and Cricket, which I coach here at Radley. I have been lucky enough to go and help on some amazing school trips across the globe including Tanzania, China and Russia.
In Sport
where next?